Set your sights on something new

The New Year signals new beginnings – a time to reflect, set goals and explore something different. From live music to theatre performances, comedy and community events, there’s no shortage of things to see and do in Wimbledon Town Centre.

Look for a superb line-up of performances this season at the New Wimbledon Theatre, including the show-stopping musical On Your Feet!, Matthew Bourne’s legendary film adaptation of ‘The Red Shoes’ and Adam Kay’s ‘This is Going to Hurt’.  If it’s live music or comedy you’re after, head to the Studio at New Wimbledon Theatre for Jazz in a Broad Way or Comedy Round Mine.

The Polka Theatre is set to re-open late 2020 and is still running activities in Wimbledon Library and the Studio at New Wimbledon Theatre.

See What’s On in Wimbledon 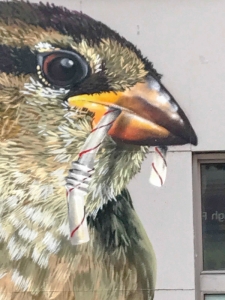 Looking for something a little more low-key? Take a wander through Wimbledon to view the new ‘It’s Oh So Quiet’ art collaboration with artist Louis Masai, on Alwyne Road. This street art aims to raise awareness of the decline of British birds in London, particularly the House Sparrow, renowned for its birdsong and seen as a vital part of urban life. Watch the public reaction to the art.

Or go further afield and head out for a stroll to visit the landmarks of Secret Wimbledon or the Rainbow Crossing on The Broadway, next to New Wimbledon Theatre and CMYK bar, which celebrates the town’s inclusivity.