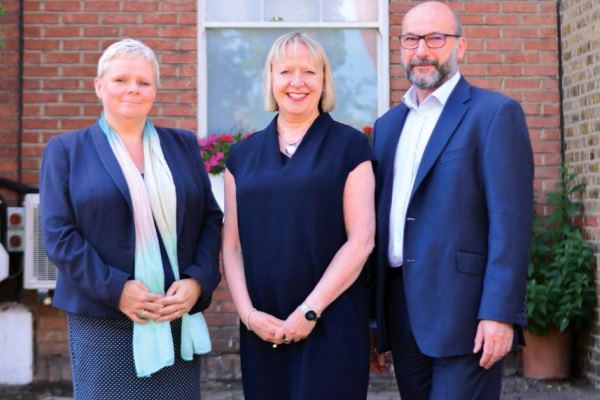 Take one family-owned school in a leafy historic village just 20 minutes from central London, add a team of super-qualified teachers and a reputation for throwing great parties and you have the recipe for a great language school. Is it that simple? Not according to Jane Dancaster and Fiona Dunlop of Wimbledon School of English, and they should know.

Wimbledon was the first school in the UK to get a perfect score in its British Council inspection and now they have just become the first school to do it twice in a row. What is the secret? Train. Keep on training.

And plan down to the last tiny detail.

At Wimbledon School of English they prepare for an inspection with military precision, like the Household Cavalry preparing for a royal parade. I meet the two Wimbledon commanders for lunch. Jane, managing director of the school, combines a penchant for colourful clothes and an infectious sense of humour with one of the best business brains in EFL.

Principal Fiona is an educationalist to her Scottish finger tips and the very definition of doughty: ‘determined, brave and unwilling ever to stop trying to achieve something’.

A lunch with these two ladies is filled with laughter, but when it comes to inspections they are very serious indeed.

They do it by the book, the British Council handbook, the document that outlines in detail the hundred or so criteria that must be met at inspection.

The secret to getting a perfect score, Jane tells me, is to make sure you meet every single one. But in their most recent inspection, the book was slow in coming. A revision to the criteria was released in September but the updated handbook didn’t appear until December, barely two months before Wimbledon’s inspection.

“What I think is really good about the inspection process is that it gets the whole school working together as a team, all working to the same goal ”

‘We were only the second school to be inspected under the new criteria,’ says Jane. The detailed work began, the two pored over the handbook checking every single detail.

Then Jane produced her ‘list’. ‘I write down every single thing we need to do and who needs to do it. For example, Gvidas (the facilities co-ordinator) has to fix the bathroom mirror. Then I check that Gvidas has fixed the mirror.’ Fiona marshals the paperwork, aided by the invaluable Duncan, one of the academic managers and working with the admin staff on every policy, every record, every file. ‘I think inspections may be even tougher on the administrators than the teachers. They have to start on the process much earlier. They are working on it for longer.’

‘At this point in the process,’ admits Jane, ‘nobody likes us very much.’ ‘We irritate everyone,’ agrees Fiona. Which is where the training kicks in.

Continuous professional development (CPD) is the watchword at Wimbledon. Jane has championed it for years, campaigning to make it an essential element of the inspection.

And training is not just for teachers. Take accommodation manager Julie Ransley, previously a host parent for the school.

With inspection looming, the admin team sprang into action under the aegis of director of operations Sandro Saviolo, who arrived as a student in 1983, ably assisted by registrar Barbara Goodson.

‘An inspector said to me,’ says Jane with a grin, ‘every school needs a Barbara’.

Director of studies Shanel Summers rallied the teachers. Formerly the school’s learning technologies manager, she also had to prepare to spend hours closeted with the inspectors.

‘You have to show them what you are doing,’ says Jane, ‘and then tell them why you are doing it.’ And then do it well. To get a perfect score, everybody has to do everything well.

‘What I think is really good about the inspection process,’ says Fiona, ‘is that it gets the whole school working together as a team, all working to the same goal. ’

‘I also think the British Council inspection is the best scheme in the industry,’ says Jane. ‘It really keeps you on your toes.’

But even the mighty Wimbledon team admit they cannot do it without support. Being a member of TEN, the association of top non-chain schools, is very helpful, says Jane.

But the most important ingredient is the support of the school’s owners.

‘We really couldn’t do this without the Housdon family,’ Jane says.

They support us in everything we do. ‘We are very lucky,’ says Fiona.

So how did Wimbledon School celebrate hard work and the luck that earned them their second perfect score? ‘We all partied the night away in the pub,’ Jane says. These two Wimbledon women may pride themselves in running a ‘serious, academic school with highly professional staff’… but they also really know how to throw a party.’