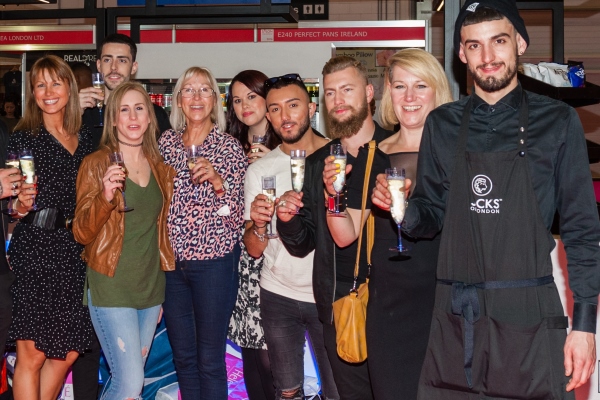 The dapper chaps at Wimbledon’s Jacks of London barbers are in seventh Heaven after hitting the shortlist in seven awards over the space of just one week.

Acknowledged as one of the UK’s top male grooming brands, the prize-winning barber store is used to receiving accolades for its outstanding barbering performance, but even so, the crew at Jacks Wimbledon Bridge premises were elated to have so many nods come in at once.

‘It’s fantastic to get seven nominations in such a short time. We are well chuffed,’ said Jacks’ Master Barber in Wimbledon, Holly Rodgers. ‘We constantly push ourselves to be the best we can, pitting our skills against others in our craft. It’s a solid way to ensure the crew is always working at its best, and that our clients get the best cut and care they can at our store. To be singled out as one of a handful of other barbers across the UK worthy of an award shows we are doing it right.’

The Jacks Crew has made the finals of ShortList magazine’s Grooming Awards for Best New Men’s Styling product, plus it has two teams in the regional finals of the L’Oréal Colour Trophy and is in the running for three separate prizes in the Cut awards, run by Hair magazine, the UK’s top grooming title. The guys also got through to American Crew All Star Challenge, a competition run by the cool US-based brand to search out the hottest male looks for 2017.

‘Being good enough to enter awards takes determination, vision and discipline,’ added Holly, who is one of the finlaists in the L’Oréal competition. ‘It’s not just about our egos, it’s the ultimate way to keep our skills sharp, our crew ahead of the competition and our clients 100% satisfied.’

Formed in 1995, Jacks of London is the original modern barber, famed for its faultless and contemporary take on the full range of classic men’s styling techniques.

Over those two decades it has built a solid reputation among fashion-savvy guys everywhere, specialising in giving clients the full male grooming experience, with complimentary bar, live sports and big, comfy, man-friendly leather sofas in all its barber stores. The experience extends to Jacks’ exclusive The True Gent range of shampoos, conditioners and styling products, all with the fresh, overtly masculine tang of citrus and pomegranate.

This year Jacks is set to cement its position as a leading creative force in the male grooming world with the opening of a training academy which will educate barbers from across the world in its unique brand of hair cutting and styling techniques.