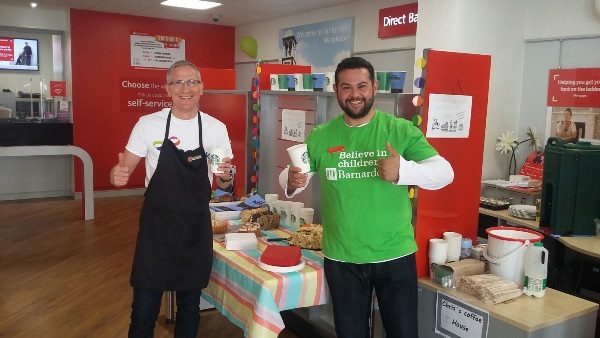 Santander raised more than £1700 for  charity – 50% was raised by the team at Wimbledon with Santander match funding the amount.. The money donated will go to four separate charities – Wimbledon based charity Jigsaw 4U, Age UK, Barnados, and The Evening Standard Dispossessed Fund for all those affected by the Grenfell Tower Fire. Local businesses including M&S, Starbucks and Diba provided support.

Chris, the Branch Director for Santander Wimbledon, was delighted with the amount of money raised:

“I’m happy that we are able to come together as a branch and raise a tremendous amount of money for these charities. We have raised money for great causes in the past and will continue to do so, to support our local communities.”

“Santander continues to be involved in local events to not only give something back but to also showcase our community spirit. The figure we raised in Wimbledon is part of the Croydon region, which in total the figure raised is now well over £11,000 that Santander have matched. Thank you to everybody who donated and supported us; a great effort and result for everybody involved and the local Community as a whole”

A Charity Cake Day was organised inside the branch where a few of the local businesses got into the Community spirit – Starbucks and Caffè Nero supplied teas,coffees and cups. M&S in Centre Court also supplied cakes. Donations of £3 of more could be  entered into a draw to win a meal for two at Diba Restaurant who opened in the summer on The Broadway.

The money that was being raised was put into a money tube that sat behind the tills for the two weeks where people were able to see the banks progress as it filled up. Keeping up the fundraising, Chris and two of his colleagues took part in a sponsored walk along with other Santander staff from different branches. The walk took them through Westminster, London Bridge and The Grenfell Tower.

Lobbying for a clean town centre
Scroll to top