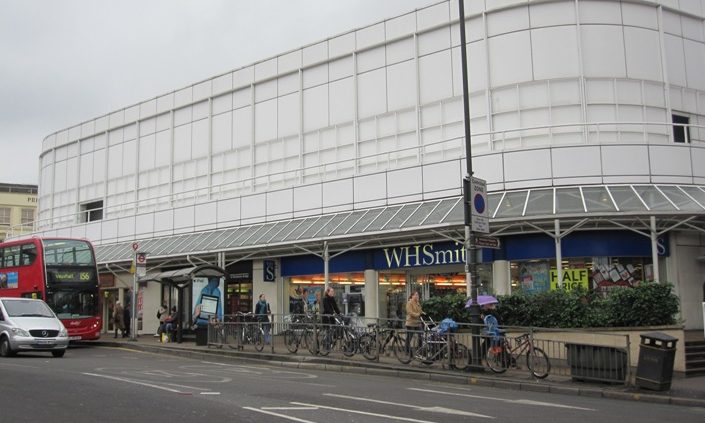 It was with much sadness that Love Wimbledon learned in 2015 that Wimbledon’s large WHSmith and Waterstones stores would be closing. There is a new store expected to open in the units in 2016: Metro Bank. This new store is a retail bank which will incorporate a regional training centre.

Love Wimbledon is working with Waterstones and WHSmith to identify suitable new locations for the businesses in the town centre. As a Business Improvement District we want, like many customers and residents, to continue to see popular stores in our town centre and these would include WHSmith and Waterstones.

In autumn 2015 when Metro Bank applied for changes to the building, Love Wimbledon was at the forefront of lobbying the council to consider the impact the change of use could have on Wimbledon Town Centre. Our concerns highlighted in the comments included:

‘Opening a bank on this site will further restrict customer choice in the town centre by closing two significant anchor retailers, reducing Wimbledon’s attractiveness and retail diversity, thereby reducing footfall to the area.’

We also saw one aspect of the changes as a potentially positive addition to the town centre:

‘Love Wimbledon welcomes the redevelopment proposal for the ‘pocket park’ and public realm area, although we would recommend taking the advice of the Met Police Designing Out Crime initiative before final plans are approved for this area. We also support the introduction of an additional CCTV camera on Wimbledon Bridge.’ (This is the area between Waitrose and WHSmith)

At the moment a date for Metro Bank opening has not been set. We will keep our businesses and customers informed of any changes we know about so that you will be the first to hear where and when Waterstones and WHSmith will be back.

In the meantime the town centre has a wide variety of shops and just as a reminder:

Stationery can be bought at Rymans and Fielders.

Books can be ordered on line and collected from Doddle or get your second hand books from Copperfields.

There is the smaller WHSmiths News on the station forecourt for all the above – all right in the heart of Wimbledon Town Centre.