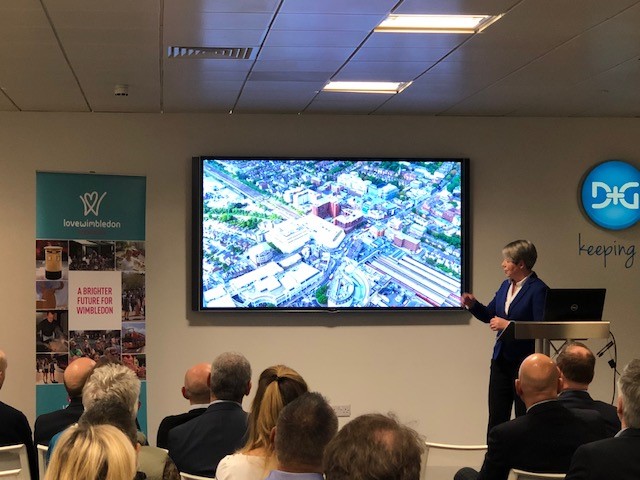 On Wednesday 26 February we hosted the Masterplan Forum with Merton Council for businesses, landlords and agents outlining the final proposals for Merton Council’s vision for Wimbledon Town Centre. Over 70 people attended, giving the opportunity for businesses, property owners and other key stakeholders to ask questions about the proposals.

CEO Helen Clark Bell urged business owners, agents and landlords to ‘do something different and think creatively’ and work with Love Wimbledon BID to deliver the aspirations to improve the Wimbledon experience, with more things to do or see whether cultural or fun whilst making it a greener, healthier and more playful environment.  Paul McGarry, Head of Future Merton, discussed the longer term vision and some of the shorter term plans for Wimbledon Town Centre including a new public space outside New Wimbledon Theatre and improving St Mark’s Place.

The area covered by the masterplan stretches across the whole Love Wimbledon BID area and the full masterplan document is available on their website.

Love Wimbledon will be releasing our response early next week.

The session provoked healthy discussions about independent businesses, landlord philanthropy and working to improve Wimbledon as a destination.

Martin Whelton, Merton Council cabinet member for regeneration, housing & transport, highlighted that the Council’s aspiration was to make Merton and Wimbledon ‘A great place to live, work and learn.’

Helen Clark Bell commented ‘Wimbledon is a town for all and does have an exciting future. To achieve this it requires a strong synergy between the users and owners of Wimbledon.’

Paul McGarry agreed, asking businesses and landlords to ‘Be brave, be creative’.

In the next five years new development/refurbishment is expected to be happening at:

Paul McGarry commented ‘Independent retail and culture is the future of the High Street.’

What came out strongly is Wimbledon needs more and better commercial space, and stakeholders should consider how it supports startups and independents whether retail, food or office based in the future. What was clear from the conversation was Wimbledon is changing, ‘the car will no longer be king’ and Wimbledon is becoming a cultural centre, an aspiration supported by many. 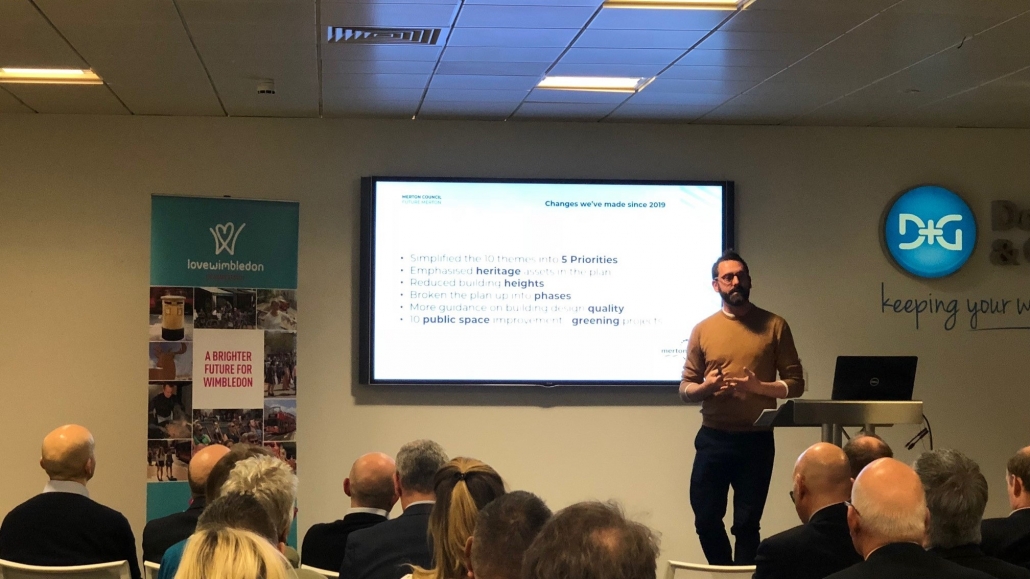 The consultation closes on 6th March so please do respond as this is an important, once in a lifetime document and could impact you.

There are FIVE emerging priorities on the masterplan:

We need to work together to deliver strong aspirations for Wimbledon in 2030 and beyond.

The council masterplan for Wimbledon is still in consultation and closes just after New Year. Love Wimbledon is overall supportive of the vision of the masterplan in particular that they have listened to business and residential feedback during the process to inform the journey. We will be issuing a full response in the next ten days read more here.

Some of the benefits for Wimbledon Town Centre from the masterplan include:

We will be raising  a number of questions on some of the detail which we will be highlighting in our response.

To make a response to the survey please click here

The area covered by the masterplan stretches across the whole Love Wimbledon BID area so we do encourage you to read it.

Merton Council is keen to hear the business voice as well as residents and other stakeholders. The consultation has been extended to 6th January 2019.

Emerging Priorities on The Masterplan:

Helen Clark Bell, CEO of Love Wimbledon comments, “Love Wimbledon has been an integral part of the consultation process over the last few years that has led to the development of the masterplan for Wimbledon. Having worked with Merton Council and the Design Council on the initial Design Competition in 2014, it is great to see so many of these initial ideas being brought forward to give Wimbledon town centre a strong vision and aspirations for managed growth over the next few decades.

“We are particularly keen to see the emphasis on greening of the town and improvement of public space to enhance the pedestrian experience as this is paramount in the development of any town. We look forward to hearing the views of local businesses, landowners and other stakeholders during this consultation to ensure that Wimbledon further develops as an attractive town for commerce, which in turn delivers a great place for individuals, either as residents, employees or visitors to enjoy their leisure time.”

Date for your diary

Love Wimbledon and Merton Council will be organising a business, landlord and agent briefing session to answer questions you may have. We expect this to be in early November and will be in contact again when the details are confirmed.

What is a masterplan?

A masterplan of an area, in this case Wimbledon Town Centre, provides a long term vision for the future development of the area. This stems from understanding how people interact with and use the town, its buildings and its public spaces. It helps to guide development and investment decisions, promoting economic growth and giving clarity to investors, landowners over the quality and scope of proposed development. It provides a structured approach and creates a clear framework for developing an area and delivers strong aspirations for the town for 2030 and beyond.