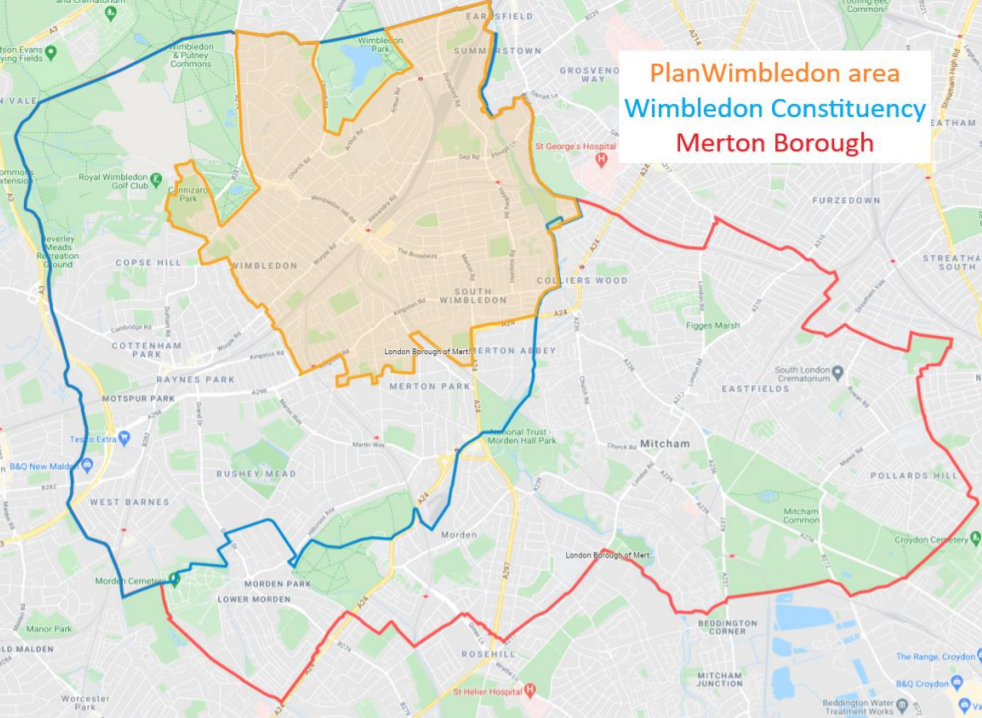 A community group called PlanWimbledon has applied to Merton Council to designate a proposed neighbourhood area, predominantly around Wimbledon and to become the designated Neighbourhood Forum for an area extending to around a third of Merton Borough, involving around 40,000 residents.

Love Wimbledon is not objecting to the Forum being designated as a lead body for neighbourhood planning purposes for the wider area but is very concerned about the inclusion of Wimbledon Town Centre as the CBD within the designation application. There is currently a lack of detail in terms of the aims and aspirations of PlanWimbledon with regard to the Town Centre neither is there an understanding of the approach or relationship with the existing SPD adopted in November 2020 that has been developed through extensive consultation. There is also a lack of business involvement and say in terms of the governance structure of the proposed Forum.

Whilst there is no theoretical limit to the size of a neighbourhood planning area, with over 100 Forums now established in the GLA area, we note that most are in the 10-20,000 population bracket. There are exceptions such as Mill Hill (27,000), Finsbury Park and Stroud Green (30,000), Isle of Dogs (28,000), but these do not include centres of the same planning status as Wimbledon.

The proposed physical boundary and resulting population is of a large ‘town’ rather than a ‘neighbourhood’ size & larger than any other neighbourhood area of which we are aware. Whilst populations of 40,000 are more common outside of metropolitan areas – for example in market towns, these are mostly led by Town Councils with a long track record of engagement and delivery.

Love Wimbledon BID welcomes and supports the view of Plan Wimbledon that the Town Centre is vital for accessing local services, shops, workplaces, hospitality, transport and hubs.  Over the last 9 years Love Wimbledon BID has invested significant effort to widely consult and influence the development of the masterplan and subsequent SPD.  Whilst we don’t consider the masterplan to be perfect, we understand the SPD guidance, together with the Local Plan policy framework for the centre, namely policies CS.6, CS.7, CS14 and CS18-20 are all strategic policies and therefore provide a strong statutory basis for planning purposes, with which any neighbourhood plan would have to be in conformity and yet this document is not referred to within the PlanWimbledon proposal.

Further, Wimbledon Town Centre is designated as a Major Centre in the London Plan and indeed is Merton’s only Major Centre. It is also designated as a GLA Opportunity Area with Colliers Wood and South Wimbledon in the emerging London Plan. Its role therefore is significant beyond Wimbledon. Having invested so much time and effort relating to the centre’s strategic as well as our local role, Love Wimbledon wants to build on what is already there in terms of the SPD Guidance and Local Plan Policies.

We are determined therefore, working with Merton Council, property owners, businesses, service providers and residents, to maximise our influence over the future spatial development of the Town Centre (i.e. Love Wimbledon BID’s agreed boundary) and how the existing 2020 masterplan develops out. Hence our desire to pursue a business-led Neighbourhood Forum and Plan which truly reflects business as well as residential issues.

A business-led Neighbourhood Forum and Plan, proposed by Love Wimbledon BID would need support from both residents and businesses in a referendum. The current proposition would not require this, and businesses could only have a say via their employees if they lived locally and, significantly, would not incorporate the views of the real estate property owners. Many existing business-led Neighbourhood Forums have a balance of business and resident representation on their steering groups (e.g. Hyde Park and Paddington, Central Ealing, Mayfair, Spitalfields). We also feel, as an existing community organisation, and through our extensive business network, that Love Wimbledon is very well placed to facilitate a dynamic dialogue between residents, businesses, and real estate interests. We are currently in the process of surveying key sectors we work with to explore this further. In terms of the Plan Wimbledon constitution, whilst businesses can join they do not appear to have a vote on the plan as businesses as a sector, and there appears to be no recognition of property owners or asset managers, which we find surprising given that the proposition to include a major metropolitan centre, but once again most likely relates to the unwieldy size of the proposed area.

The consultation launch date of 12th April is unfortunate with so many businesses just emerging from lockdown and as mentioned above, we are currently polling a cross section of businesses and property owners to get their views.  Early indications are that 90% of businesses from a range of commercial interests do not support this resident led neighbourhood plan including the Town Centre and verbal feedback from a recent Strategic Leaders Forum also supported this view.

We are receiving comments such as: –

“There is adequate planning control exercised by LB Merton. Further layers of control will add to an already lengthy process and will make Wimbledon a less attractive place in which to invest.”

“There is already in place a planning framework, it may not be perfect, but it is fair and provides the local neighbourhood an opportunity to put forward their concerns.”

Whilst we therefore do not support the inclusion of the Town Centre, we have offered to work with Plan Wimbledon using the significant technical support that is available from the Locality Aecom National Support Programme to try and identify areas of agreement between us and PlanWimbledon which could then be written up into a ‘Statement of Common Aims’.

Love Wimbledon is an established community organisation with a defined border and extensive relationships built up over the last nine years. We have invested significant time and resources working through the complex issues with CBD stakeholders relating to the spatial future of the CBD and believe that we are best placed to explore the opportunity of organising a business-led Neighbourhood Forum for Wimbledon Town Centre.

We urge all of our businesses to have their say by responding to Plan Wimbledon’s proposals here.