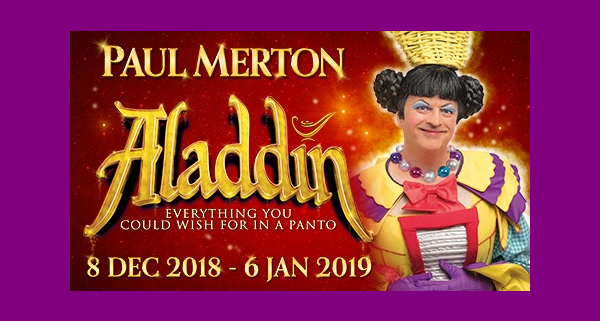 Tickets are already on sale – don’t miss out! CLICK HERE to book now!

New Wimbledon Theatre is pleased to announce that writer, actor, comedian, radio and television presenter Paul Merton will be stepping out from behind the iconic Have I Got News For You desk and donning heels to make his live pantomime debut as Widow Twankey in this year’s must-see family pantomime, Aladdin, from 8 December – 6 January.

One of Britain’s best-loved and most popular comedians, Paul’s career began at the infamous Comedy Store and he regularly appears with the Comedy Store Players and tours the UK. He has appeared in hit television shows such as Whose Line Is It Anyway? and Room 101, as well as various travelogues and documentaries. He is also a regular on Radio 4 and is now the second longest serving panellist on Just a Minute.

The BAFTA and multi-British Comedy Award winner has been a mainstay of the popular BBC news quiz Have I Got News For You since it made its television debut nearly thirty years ago where his dry sense of humour and quick wit solidified his reputation as one of the UK’s finest funny men. He has had several books published, including his acclaimed autobiography Only When I Laugh.

Aladdin will be Paul’s live panto debut, having appeared in four pantomimes recorded specifically for television broadcast in the late nineties.

Aladdin will be produced by Qdos Entertainment, the world’s biggest pantomime producer, in the second year of partnership with New Wimbledon Theatre. Aladdin will feature all of the ingredients of the perfect pantomime Wimbledon theatregoers have come to expect in a production packed with a lamp full of laughter, stunning music and dancing, plenty of audience participation and jaw-dropping special effects.

Qdos Entertainment’s managing director Michael Harrison said: “I’m thrilled that we have secured Paul and persuaded him to give the heels a go in his first, full pantomime run. His Widow Twankey will give audiences a chance to see the man behind the panel as they’ve never seen him before with plenty of opportunities to laugh at his quick wit and funny take on the story.”

New Wimbledon Theatre, Theatre Director Nick Parr said: “I am delighted that Qdos have rubbed their magic lamp once again and summoned up the extraordinary talents of Paul Merton for this year’s spectacular New Wimbledon Theatre pantomime.  Once again, families from across South West London will have their festive wishes come true when they join Paul and the cast of Aladdin in Wimbledon in December.”

Featuring a wish-granting genie, an evil sorcerer and the timeless tale of the Twankey family,  audiences should hop aboard a flying carpet and fly to the Box Office to secure their tickets for this year’s must-see, genie-us family pantomime.