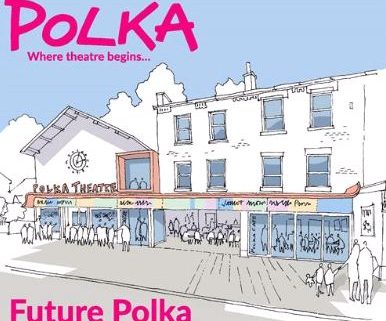 Polka Theatre has exciting plans for the first major improvement to the building since 1979.

Earlier this year Arts Council England approved the first stage of Polka Theatre’s application for a grant of £2.5m towards the proposed £5.1m cost of redeveloping the premises. This is the first major investment in the building since it opened its doors on The Broadway, Wimbledon in 1979, pioneering the idea of a theatre dedicated to children – a stimulating, fully integrated venue, including performance spaces, indoor and outdoor interactive play areas, family-friendly café and activities. Since opening, Polka has attracted over 3.4m children, teachers, parents and carers from across London and the South East and its productions are staged nationally and internationally.

The planned redevelopment will be instrumental in helping Polka redefine and improve its visitor experience and provide an environment in which artistic excellence can flourish. Key features will include the creation of a National Centre for Early Years Theatre including a new auditorium for the under 6s and a multipurpose rehearsal space, as well as a new Creative Learning Studio. The plans also support Polka’s desire to increase its sustainability and financial resilience.

Polka Theatre invites any interested parties to come along to one of their drop-in sessions to learn more about this redevelopment and how it will benefit future generations of children and families.

If you would like to support the redevelopment by making a donation, then please click here or contact the Development Team directly on 020 8545 8368 or via email.