Hidden Gems around Our Town

Wimbledon is a vibrant town full of hidden gems ready to be explored. From innovative street art to architectural secrets, take a walk through the town centre and delve into the diverse cultural scene that makes Wimbledon more than just a tennis town. 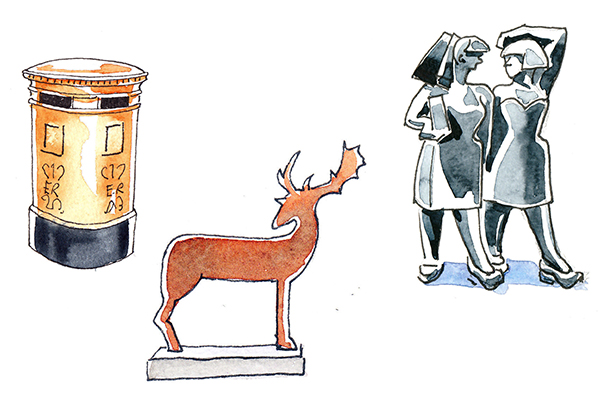 Free Art for All 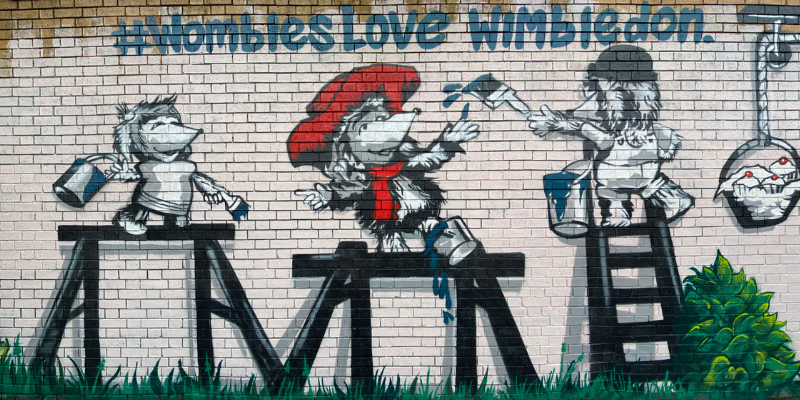 Our furry friends are back in Wimbledon, and have come to the rescue to help clean up some unsightly graffiti in the town. Blossoming out of hibernation with a new look, our favourite childhood characters are encouraging us all to do more for our local environment, with this new mural showing us why we should love where we live.

Location: on the railway path overlooking Wimbledon railway tracks (walk down the side of Little Waitrose and behind Tuition House offices). 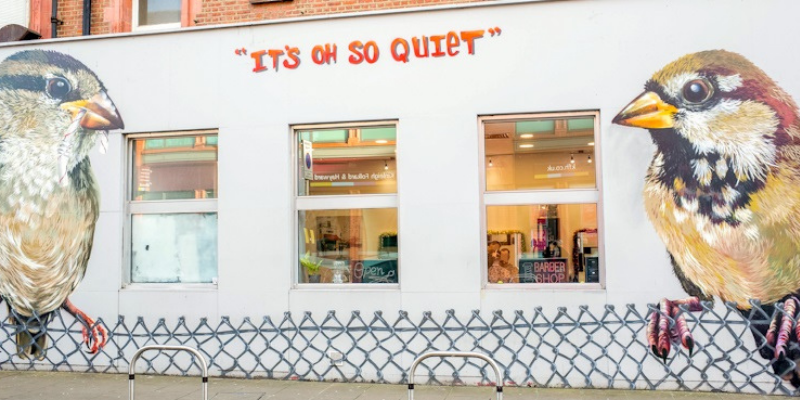 Based on the hit single ‘It’s Oh So Quiet’ by Icelandic musician Björk, this artwork reflects how birdsong has reduced over time, due to the population decline of house sparrows. Featuring a male and female house sparrow inferring the question of ‘where has the sparrow song gone’, the installation aims to raise awareness of the decline of British birds in London – particularly the House Sparrow which is renowned for its birdsong and seen as a vital part of urban life. 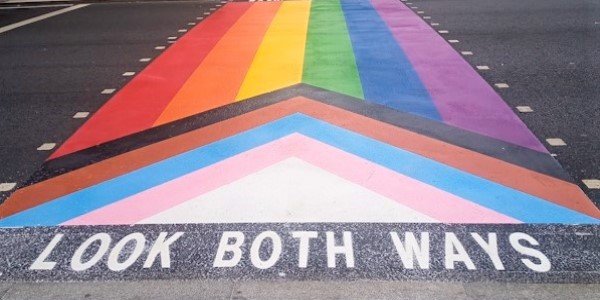 To celebrate the town’s inclusivity and welcome its first LGBTQ+ bar (CMYK), Wimbledon received it’s very own rainbow crossing in 2019! Initially created in the design of the Rainbow Flag – as a symbol to celebrate the LGBTQ+ community and its diversity, the crossing has been recently updated to feature the ‘Progress Pride’ flag and include representation for black and trans pride. As the the first rainbow crossing in London with the new design, it provides a welcoming diversity message and colourful joy to schoolchildren, shoppers and culture-lovers who are passing by.

Location: in front of the entrance to New Wimbledon Theatre on Wimbledon Broadway. 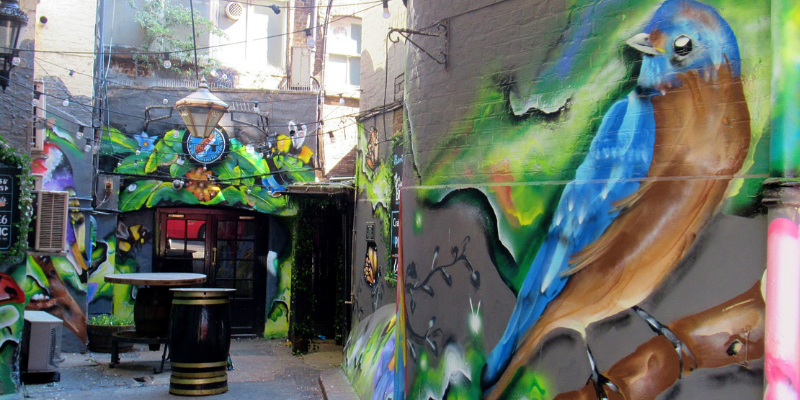 Bringing the feeling of an exotic forest to our town, this bird-themed mural provides a colourful and vibrant backdrop to enjoy drinks with your loved ones. Hidden in the garden of Berties Bar in Wimbledon Town Centre (located within The Prince of Wales pub), this artwork was done by a member of the Berties Bar team, Topi19, who is a local street artist, originally from Budapest and has been painting since 2004.

Location: Berties Bar in The Prince of Wales pub.

Commerce and Creative in one

The motto “Sine Labe Decus” means “Honour without Stain” and is inscribed on the coat of Arms above Tesco Metro on the 1930’s listed town hall.

In the early nineties, in a studio within the office block known affectionately as the ‘fridge’, Lara Croft was born (or rather devised). Her fictional character grew up in Wimbledon (must be all the health clubs we have).

When they were removed for roadworks in 2011 it caused uproar, but it was just temporary. The two fat ladies are a permanent addition to our town and this popular work of art was designed by Andre Wallace.

The link between the Town, the Village and the Common. The stag was created by local artist Isabelle Southwood and presides in the station forecourt.

Designed for the actors of the New Wimbledon Theatre, the baths can be found downstairs in Bar CMYK under the theatre. Unfortunately no longer in use!

Our post box was painted on behalf of Sophie Hosking, Gold Medal Winner in the London 2012 Olympics. Sophie is a Wimbledon resident and international rower.

The town loves the tennis and the visitors it brings. Occasionally the stars can be spotted in our restaurants around town but the best thing is you can watch the tennis live on our Big Screen on The Piazza every year!

The New Wimbledon Theatre is a Grade II Listed Edwardian theatre built by J B Mullholland and opened its doors to the public on 26 December 1910. Today it’s still a favourite with families and friends to enjoy over 50 different shows a year.

The richness of the deep red brick provides a warmth today just as it would have when it was built in the late 1880s. You can also have a lovely glass of something cool or warming as it’s now an All Bar One.

Built in 1887 with meticulous detail, there is a ‘book motif’ at the side of the building a later 21st century addition. Opening in 1887, the library was designed by Messrs Potts, Sulman and Hennings and made from finely ornamented Victorian brick and would have originally been surrounded by trees, railings and privet hedges.

A host of listed facades create the main elevations to the shopping centre. An art deco town hall on the corner leads to Queens Road where the listed frontages of the old fire station, school and church provide historic references and a textural palette.

And now the detail…

The Station, opened in 1837 by London and South Western Rail (L&SWR), marks the early distinction between the Village and the Town Centre. Residential streets popped up surrounding the station in the Victorian era and soon Wimbledon Broadway began to develop.

The Town Centre contains architecturally important buildings including the red brick of early 20th Century buildings and Portland Stone Town Hall.  Holy Trinity Church, towards South Wimbledon, was designed with its own unique style and stone. The Polka children’s theatre is Holy Trinity’s former halls and opened in 1979.

In the early 1990’s, Wimbledon burst into a new round of change – Centre Court Shopping Centre was developed on the land next to the station incorporating the old town hall building and a new portico, in keeping with the old architecture.

In the late 90’s, a 1960’s tower block was knocked down and replaced with a new cinema and retail / restaurants around The Piazza and the retail expansion for the town centre began.  (Elys department store opened in 1876).

Wimbledon still has great shops, but also many restaurants and over 15,000 people who come to work here every day in our offices and commercial centre.

If you want to try a heritage walk try The Wimbledon Way from the Polka all the way to the tennis courts via the village.