Wimbledon brings the best in eating, top brands, independent shops and cultural events. It is a safe family-friendly town with an eating out culture. Many are tempted by its markets, pop-ups and festivals; there really is something for everyone in Wimbledon Town Centre. With an abundance of cultural events, you’ll get a flavour of the vibrancy and diversity of our town centre. 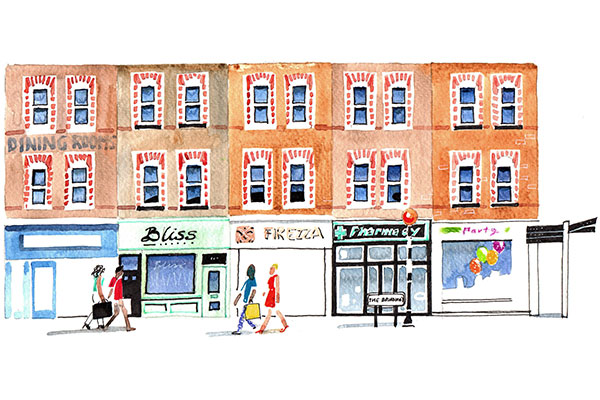 Screens (and the pop up ones!)

…and a wonderful community!

The UK’s first children’s theatre, bringing exceptional performances and workshops to a national audience (and a fun kid’s café). Polka is currently closed for refurbishment, but is re-opening in spring 2021. Keep your eyes peeled for updates!

Since Edwardian times, the 1,600 seat New Wimbledon Theatre has brought West End shows to the heart of Wimbledon. Great pantos, great performances and a great night out.

An independent cinema group, known as the place to discover other worlds and cultures, or see a different perspective. Experience award-winning international art movies in a great atmosphere, and for those who like a drink, make sure to visit the bar.

Situated in the centre of town, the main hub of activities and events, from arts festivals and markets, to pop-ups and celebrations.

The Library and Merton Arts Space

An architecturally significant building (with carved Shakespeare and Milton heads) offering workshops, activities and books – making it the most popular in the region. The new arts area holds talks, theatre and music events throughout the year. There is also a newly opened café inside the Library, Gosto Fino, offering a selection of freshly made food and drinks (they also offer events catering).

Commonly known as Wimbledon, The Championships is the oldest tennis tournament in the world and the largest event in the Wimbledon annual calendar. Hosted in the first two weeks of July, the tournament brings half a million visitors and sporting fans to SW19 with many using our Town Centre transport links to get to the front gates. This famous and internationally-loved tournament has been running since 1877 at the All England Club.

Held over two weekends in September, the heart of the festival is the Artists’ Open Houses and Studios tours along with exhibitions of local artists’ work in and around Wimbledon. There are also joint artist and creative activities in the Town Centre.

Founded in 2009, WIMF inspires audiences young and old, by bringing the finest musicians in the world to perform live in venues close to their doorsteps. The two week event is held in November.

Wimbledon Broadway is home to a diverse array of shops, including great independents and major retail brands, where you can easily find something for everyone – the fashion conscious, the home-improver or even the techy-mad.

The town centre’s covered shopping destination with secure parking, food, fashion and gifts – all under one roof.

FIND OUT MORE
Scroll to top